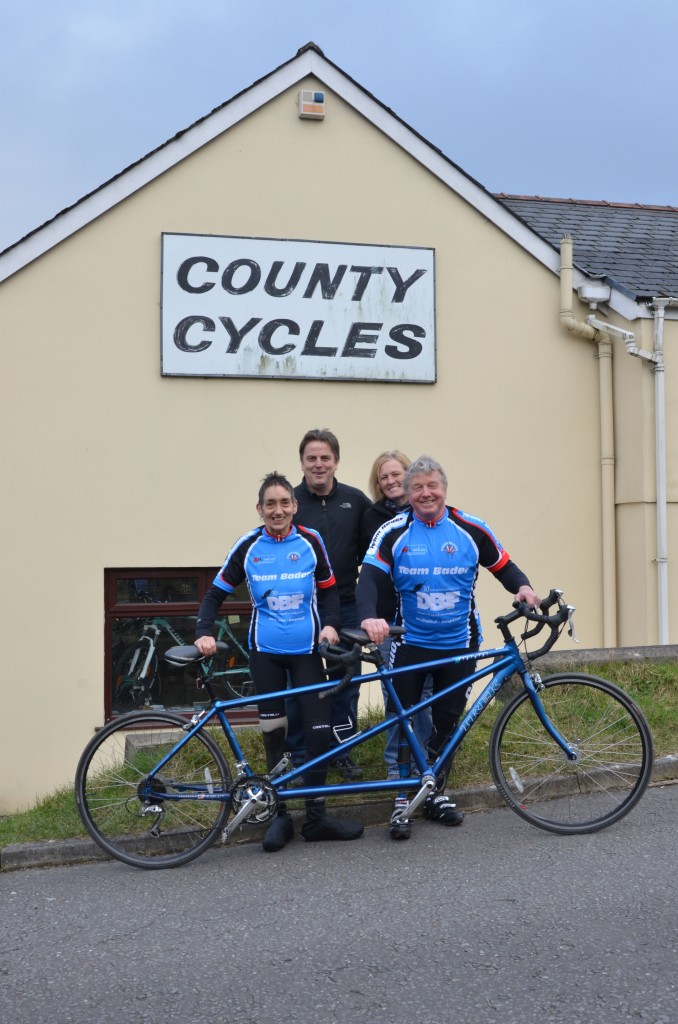 From left to right: Margaret (Maggz) Biggs, Peter and Sandra Jones of County Cycles and Wynn Jenkins with That Tandem kindly supplied by County Cycles

The Team consisted of 4 amputees; DBF Ambassadors, Wyn Jenkins and Margaret Biggs, riding a tandem and Gemma Trotter and Colin Davies on 2-wheelers (yes – I know nothing about bikes!) and 12 supporters from the wonderful County Merlin Cycles based at County Cycles at Cross Hands near Llanelli. We are extremely grateful to Peter and Sandra Jones of County Cycles for the loan of the tandem, providing expert technical back-up and for running a very healthy collection in the shop. The route was chosen by Wyn Jenkins and finalised after a trial ride by Guto Evans accompanied half the way by Wyn himself. Guto is clearly a brave man to ride it twice in quick succession – our thanks to him.

The ride started at Holyhead, Anglesey, where TEAM BADER, having travelled from the Travel Lodge at Porthmadog, and supporters gathered in the Port Car Park to set up and get prepared for the Challenge. The Port and Car Park staff couldn’t have been more helpful and enthusiastic and we received the first donations of the ride. Thanks particularly to  Alan Williams and Craig from Stena Line. Both suggested a repeat performance next year with the promise of more involvement and Craig even offering to ride the 1st mile with the Team. Car Park attendants also expressed a wish to be kept informed of a repeat ride with the promise of help and support. With enthusiasm like that, how could Team Bader Tandem Challenge Wales NOT become an annual event…?! We are very grateful to them all, anyway, for making the start of the ride as easy and enjoyable as nerves would allow.

After a few last minute adjustments, most of TEAM BADER made a slightly delayed start from Holyhead, finally getting away shortly after 11.30. Three of the team were unfortunately delayed (one brilliant case of the Law of Sod applying…) and were to arrive at Holyhead Station and catch up with the Team later, aided by Marianne and Jeff Rhys. Marianne, who did a fantastic job of organising the overnight and lunchtime stopovers was gutted not to be riding herself, but had managed to break her wrist only 2 weeks previously on a training ride. Another good reason for making this an annual event, Marianne!

Back-up vehicles looking good.Pass them if you dare…

We watched the Team out of sight and, apart from regular text updates from Maggz, when signal (variable in Wales, we discovered) and activity allowed, were out of contact with them until Day 2 when, after a lot of deliberation as to which route Wyn would have planned out of Barmouth (it turned out to be the Cycle Path alongside the railway – one we hadn’t reckoned on at all!) we finally hunted them down on the Dolgellau to Machynlleth Road. It was heart-warming indeed to come up behind the back-up vehicle with its impressive sign. Huge thanks again to the back-up drivers, Marg Jenkins (wife of Wyn) and her 2 4-legged companions in one vehicle, and Rob, Gemma’s other half, with his mini-me co-driver, Archie, in the other. They did a fantastic job and their calm, patient presence accompanying the vehicles provided terrific reassurance and was a big safety factor. I understand that drivers can have a tendency not to give cyclists as much leeway as they should and Maggz reported later that they’d had no trouble with overtaking vehicles. (I think the only one who probably got close to mowing them down was Martin who had neglected to notice a car coming the other way as we waved, hooted and cheered our way past them through a surprisingly narrow village en route. That would have been an altogether different and rather tragic end to the Challenge!) We made brief contact with the Team again the same day in a lay-by en route to Machynlleth. This was my first lesson in how quickly cyclists can travel – how wrong I was to think there would be time to make a cup of tea before they got to us…! It was wonderful to see them all pulling in to say hello even if someone on the back of the tandem did let out a shout of surprise as the bike veered across the road into our layby. There are definitely pros and cons to riding behind on a tandem! A pro, as Wyn says, is the central heating system in front of you (very welcome, I’m sure, in what was unseasonably cold weather), a con is that you are definitely not in control of the direction and the whims of the cyclist in front can easily take you by surprise!

One more meeting for a tea stop and the Pendre Garden Centre where a somewhat astonished manager did a fantastic job of making 20+ unexpected visitors very welcome and providing a seemingly endless supply of tea, coffee and hot chocolate. Very grateful thanks to him and to all who supplied en-route breaks. I understand that the Team were treated royally wherever they stopped and were met with interest, enthusiasm and, frequently, donations. I can safely say that there are a lot more people in Wales now who know about the Douglas Bader Foundation than there were before the Tandem Challenge. When the weather permitted the Team to wear the excellent TEAM BADER Strip designed by Maggz, there was no missing them! A big thank you to Maggz for her hard work in putting it all together and to Owayo for meeting her requirements so well and obligingly. The outcome was certainly worth the effort and it’s truly a kit to be proud of.

And so on to Machynlleth… The TEAM arrived, wet but full of good spirits for their overnight stay at the aptly named Wynnstay Hotel. They were joined there by friends and supporters including Roy, an old (or should that be long-standing?) friend of Wyn, who has apparently been applying various tactics to separate other friends from their money in support of a good cause! Thank you to Roy and all who have donated both in the lead up to and during the ride both directly and through JustGiving. We’ll know who more of you are in due course but your contributions are very, very welcome and we’re extremely grateful to you all. We’ll also, of course, publish the total amount raised in due course when all the monies have come in so please keep watching this space.

We left the cyclists to their welcome baths and their   early nights and headed to our campsite by the river but joined them again in the morning to see them off into yet another wet day for, apparently, the most gruelling day of the Challenge. A l-o-n-g climb into Lampeter and the very welcome comfort of the Falcondale Hotel following the relatively “easy” ride into Aberystwyth. This was also the day where, not only was it raining (almost horizontally) but there were winds gusting up to 60mph. (Probably not so bad if they’re gusting behind you!) We watched them go with some trepidation before settling down to a coffee and newspapers in the comfort of the Wynnstay Hotel…

We didn’t see the Team again (though were regularly kept updated via very welcome texts from Maggz) until the finish on Monday at The Mumbles. (Thanks here to Sandra Demar, photographer, who turned up to take photographs of the finish despite having been a victim of the Swansea measles outbreak.) (Those to follow shortly so keep checking the Website…) What a truly wonderful sight to see the whole TEAM BADER heading triumphant down the cycle track towards Verdi’s Restaurant (almost – and it would have been if not for a last-minute puncture) on the dot of the predicted 5.00pm. A small crowd had gathered to welcome them home after their fantastic efforts and there were cheers and enormous pride as they crossed the makeshift finish line. I’m sure I wasn’t the only one with tears in my eyes as they came in.

It was a wonderful and inspirational event and one I felt privileged to be involved with. A fantastic group of people and the most warm, supportive and enthusiastic camaraderie it would be possible to experience anywhere. There are too many individual thank yous to mention here – those will also follow – but a great, heartfelt, collective thank you to you all. The success of TEAM BADER TANDEM CHALLENGE WALES was only possible as a group effort and it truly couldn’t have been a nicer group.

From the Foundation’s point of view, you raised not only considerable funds but a greatly increased awareness of the charity and its work as well. Your team spirit and achievement was inspirational and will, I’ve no doubt be the start of a great new venture for the charity. TEAM BADER was founded with the intention of encouraging more amputees and other disabled into sport and your brilliant example can only help towards that.

Thank you TEAM BADER CYCLING from all at the DOUGLAS BADER FOUNDATION. You did us proud.

You will be able to see a Gallery photographs from a selection taken by Martin McCleave below. More photographs will be coming in soon so please keep on checking in. They’ll be worth seeing!!

(NB: Changing the Gallery viewing setting causes the screen to return to the top of the post so be prepared to scroll down again. Also, if you click on a picture to enlarge it, clicking on it again will return you to the picture list. Not very clear, I’m afraid!)

You can also see a great selection of photographs, which capture brilliantly the feel of the Event, taken by Marianne Rhys on the County Merlin Cycle Facebook Page: https://www.facebook.com/groups/370168349701419/?fref=ts

By Wendy McCleave of the Douglas Bader Foundation

Any cookies that may not be particularly necessary for the website to function and is used specifically to collect user personal data via analytics, ads, other embedded contents are termed as non-necessary cookies. It is mandatory to procure user consent prior to running these cookies on your website.