MADISON COUNTY, Virginia (CNN) — Amidst the tranquility of a fishing trip at the Rose River Farm in Madison County, a wounded warrior says he almost feels “semi-normal again.” 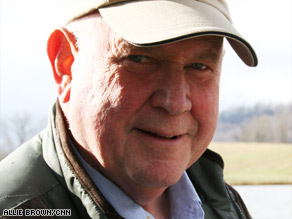 The amputee is one of about 1,000 servicemen and veterans who have reaped the benefits of the therapeutic art of fly-fishing, with the help of retired Navy Capt. Ed Nicholson.

“The demons of war, you just don’t set them aside,” says Nicholson, 67. “But once you get out on the river, the serenity is incredibly healing.”

While recovering from cancer surgery at Walter Reed Army Medical Center in 2004, Nicholson witnessed wounded and disabled men and women — many of them amputees — struggling with their injuries.

“Other than being in Vietnam and seeing people in the process of getting hurt, I never really had a full appreciation for the recovery part and what happened after they came home. My recovery was nothing compared to what they were facing. It planted the seed that maybe there’s something I could do,” Nicholson says.

The solution was obvious to Nicholson, who says being an outdoorsman is in his blood: Get them out of the hospital and into nature.

“We would run these classes that would better prepare them to be fishermen when the weather got nice and we could move outside, start casting lessons and go fishing,” he says.

Nicholson and ty flying instructor John Colburn saw that the discipline of tying flies, which requires patience and training, benefited veterans recovering from injuries. And it helped them relax.

“You have a guy who lost a leg and we get him out there wading in a stream — he gets a boost. Or a guy who lost an arm, we start him casting. He has a chance to use his new arm and actually do something that’s enjoyable,” says Nicholson. Do you know someone who should be a CNN Hero? Nominations are open at CNN.com/Heroes

“Ed [is] showing us that if you have the will, they will find a way,” says Army Staff Sgt. Brian Mancini, who lost his right eye after being hit by an explosive device in Iraq in July 2007. “It shows you that life’s not over, it’s only beginning.”

One soldier with a brain injury says tying flies, building fly rods and casting has helped him with his motor skills. Others describe feeling normal for the first time in a long time.

“Between the pain, the medication, the realization that their life has been changed, they’re doing something that gives them a great deal of pleasure and that they can look forward to,” Nicholson says.

Watch Nicholson as he helps wounded soldiers through fly-fishing »

“If you compound losing body parts with losing friends, just getting in the water is a release,” he says, adding that fishing gave him enhanced dexterity because it helped him learn to walk on prosthetics in the water.

Since 2005, Nicholson’s program has grown to more than 50 locations nationwide with “more to come,” he says. With support from The Federation of Fly Fishers and Trout Unlimited, the group is establishing long-term relationships with hospital and military staff, participants and volunteers. Participants across the country can attend outings during the spring, summer and fall.

Nicholson, who rises early and spends the better part of his day running operations for his organization, once thought he’d spend his golden years enjoying his favorite pastimes: fishing and hunting. But he says he welcomes the direction his life has taken.

“I’m doing something that gives me as much satisfaction and gratification of anything that I’ve really done. I loved serving my country. I was proud to serve for 30 years. But I’m incredibly satisfied with what I’m doing now.”

Want to get involved? Check out Project Healing Waters Fly Fishing and see how to help.

E-mail to a friend

Any cookies that may not be particularly necessary for the website to function and is used specifically to collect user personal data via analytics, ads, other embedded contents are termed as non-necessary cookies. It is mandatory to procure user consent prior to running these cookies on your website.